Many that I’ve taken or plan to take are likely ones you never heard of. There are a zillion pictures of major objects so while I did take many of them, rather crudely in many cases, I’m not interested in them. I’m more interested in the “unknown” as the University Prof in me (I taught accounting and business law at the University of Nebraska in the 70’s and 80’s) is far more taken with new knowledge to me than retaking what hundreds have already taken. I also like pushing the limits of what amateur astronomy can do. Thus you will find, when the site is complete, images of 24th magnitude gravitational arcs of distant galaxies, the remains of a collision of two asteroids that looks more like a comet than an asteroid. I took the first amateur image of Hanny’s Voorwerp only a couple days after it was announced and have picked up three other voorwerps discovered by the HST. Along the way I took the image that helped prove the often studied (from only one image with the 200″ Palomar telescope) jet in ARP 192 didn’t actually exist as believed. The reason noted astronomers using smaller scopes couldn’t see it wasn’t that it was too faint as many assumed, but that it wasn’t there! See my entry for that galaxy for details. A previously unknown planetary nebula showed up in one of my images though unfortunately, I didn’t know it at the time. At least I get credit for the discovery image. It is this type of work that interests me, rather than pretty pictures.

Many images are annotated. What information I show has expanded over the years. Normally only galaxies for which NED had distance data are annotated. Distant ones are just listed with a “G” followed by the distance in billions of light-years when their only names are their position. Quasars are marked by a “Q”. Candidate quasars with spectroscopic redshift are listed as “CQ”. Many with only photographic redshift have been later shown to not be quasars but stars with spectral characteristics that fooled photometric redshift measurements into thinking they were distant objects. Thus I rarely show these. Galaxy clusters and galaxy groups are denoted by GC and GG respectively. What NED considers a galaxy cluster is often confusing as they will list a cluster with 6 members and a group with more than that yet in their FAQ state galaxy clusters have far more members than that. Still, I use their terminology even when I can’t understand it.

As time went on I started including classification of galaxies when available at NED. I often include non-redshift measurements of distance in parentheses after the redshift distance. Distance is shown using NED’s 5 year WMAP data defining Hubble’s constant and the Omega values. While more current determinations of these factors have become available I’ve stuck with these to keep distances consistent.

For nearby galaxies the look back time distance is reasonable but as distances increase it becomes more and more problematic. I currently also show the z value for these distant objects on the annotated image when there’s room. For more information on that see the page on High Redshift. 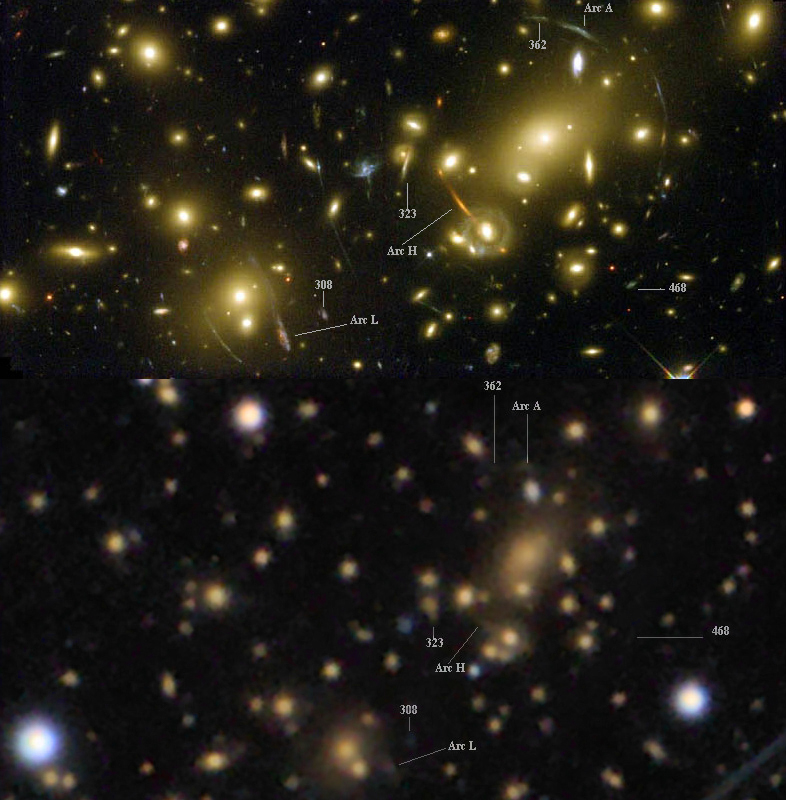